BORN to Do This 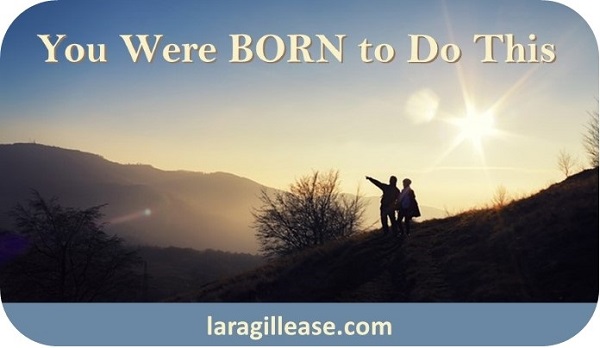 I was recently with a friend discussing how challenging it has been for me to write articles as writing is something I haven’t had much experience with.

She went on to say, “Yeah, some people are just born to write.”

This seems to be a frequent expression – “Some people are just born to…” It implies it’s an inherited skill – not a learned one.

I know this is said frequently when someone is really good at something – we say they were born to do it. But is this really true?

I thought about it and realized I have a different point of view.

First I thought about my history with writing. After the eighth grade, I didn’t do much creative writing or have much guidance from teachers about my writing. Even though I went to a high school with a demanding curriculum, my English classes didn’t hone my writing abilities.

Then, as I was technically focused throughout college with studying mathematics, I tested out of any English courses and didn’t have to write papers. Instead, I was writing mathematical proofs.

Later that same week I asked a colleague for advice about her writing process. She said she really liked a book Stephen King wrote called, On Writing. Then she said, “He was born to write.”

There it was again. This idea of someone being born to do something.

Do you remember doing something in your childhood that you liked doing, but were told you weren’t good at it or criticized for how you did it? Did you stop doing it?

A lot of people seem to stop doing a particular activity because they are told they aren’t good at it. I hear a lot of self-talk around activities like:

Well, no one can to start with. Everyone starts somewhere.

Someone who has a professional singer for a mom will tend to have an advantage in developing their singing abilities. How come? They have been exposed to it and around it regularly. They will tend to know some of the elements that go into being able to sing from listening to their mother sing.

I decided to follow up on my colleague’s recommendation and read Stephen King’s book.

What I learned was that he spent much of his childhood both reading and writing creative stories. As well, he immersed himself in movie plots during his teenage years. He then continued writing and reading throughout his adulthood. It was something he spent countless hours doing – immersing himself in it.

Malcolm Gladwell in his book, Outliers, writes about successful people who attained a level of mastery in a particular field.

“There is a story that is usually told about extremely successful people, a story that focuses on intelligence and ambition. Gladwell argues that the true story of success is very different, and that if we want to understand how some people thrive, we should spend more time looking around them – at such things as their family, their birthplace, or even their birth date. And in revealing that hidden logic, Gladwell presents a fascinating and provocative blueprint for making the most of human potential… Gladwell transforms the way we understand success.”

In Outliers, he coins the concept “the 10,000-hour rule.” It is a blueprint for those wanting to achieve mastery with a particular interest. It goes way beyond being a hobbyist at something.

One of the children I work with recently found a childhood drawing I did in one of my storybooks when I was about 10.

I remember drawing this. I remember feeling frustrated that it didn’t look anything like what I wanted to draw.

I intended to draw a store with a large window displaying a couple of the items my parents frequently purchased. I tried to draw the items on the shelf, but all I ended up drawing were a few squares labeled with their names written over them. They didn’t look anything like what I saw in the store.

Of course at that age, no one had taught me how to draw in perspective.

I didn’t realize that so I made the conclusion that most people make – I didn’t have any talent for drawing. That my drawing days at the ripe old age of 10 had come to an end.

It would have made more sense instead to consider how I could learn to draw and to look for a teacher or class.

During middle school I heard there was a most amazing teacher, Mr. Ray, who taught art and that everyone who took his class loved it. I was nervous, but I mustered up the courage to sign up for it.

Mr. Ray started the first day of class by announcing anyone could learn to draw. And that no matter how awful we thought we were at drawing, we were going to learn how to do it. And it would be easy and fun.

He was right. We did all learn to draw and we had a fabulous time. Then I also understood what made my 10-year-old drawing not come out the way that I wanted it to.

How do we learn best?

Immersing yourself in a variety of experiences in your particular field of interest.

Say you want to learn to speak French fluently. What’s the best way? Classes can help, for sure. You can start immersing yourself by being exposed to it. Watching movies in French with subtitles. Speaking and listening to native French speakers.

Think of something you would like to learn to do. What about guitar lessons? Playing bridge? Public speaking? Riding a motorcycle?

Let’s take the example of riding a motorcycle.

You most likely have already done some things in your past that have helped you learn some of the  elements that go into this already.

Knowing how to do other things like riding a bicycle and driving a car. These things will help you.

From driving a car, you will already know traffic patterns and how to respond to them.

Can you imagine if you were to take someone who didn’t know how to drive a car or ride a bicycle and teach them to ride a motorcycle? What it would be like? It would be a much steeper learning curve and take more time.

It is the same with you. If you decide to learn something you know practically nothing about, it will take more immersion. However, it can still be very worthwhile doing. And if the learning process is done in a particular way, it can be loads of fun.

Back to Malcom Gladwell and his 10,000-hour rule. This goes way beyond basic learning or being a hobbyist, and is about achieving a level of mastery. But his conclusion is the same, which is immersion. For mastery. he says to immerse yourself for 10,000 hours, which averages 1,000 hours a year over ten years.

Tim Ferris, author of the best-selling book The Four-Hour Work Week, serial entrepreneur and philanthropist, claims you can learn a language in as little as two hours a day for six months. Or if you want to learn it in three months, he says to spend four hours a day.

Immersion and exposing yourself on a continual basis. Daily or several times a week seem to be most effective.

With this start of 2017, is there something you’ve been really wanting to learn to do?

If there is, you can learn it by creating the proper environment and learning conditions:

Then watch and feel the miracle of learning happen.

And guess what? You were BORN to do this: Learning through immersion and exploration.

Lara Gillease, President & Founder of Lara’s Integrative Movement since 2000, teaches adults and children new ways of learning and how to move with greater ease and freedom while relieving tension and stress in one-on-one sessions. She also offers an online, self-study movement program, Move Free. Additionally she is a Trainer in Anat Baniel’s ABM NeuroMovement International Training Programs for certifying new NeuroMovement Teachers.
To find out if you or someone you know could benefit, set up a Free Get Acquainted Call with Lara by emailing: lara@integrativemovement.com.

1 thought on “BORN to Do This”

We take your privacy seriously. We will never spam you.

Click below to sign up for Lara's monthly news and updates and to receive your Free Flexible Back Video: